What is the FED or FOMC (Federal Open Market Committee) 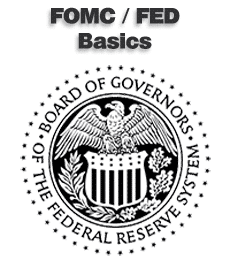 The Federal Open Market Committee, also known as the FOMC or FED, is a body whose function is to oversee the United States’ open market operations as explained below. The FOMC holds eight annual meetings to set certain key interest rates and to determine whether or not an increase or decrease in the money supply is necessary.

Fundamentally, the FOMC is the most important part of the Federal Reserve System responsible for setting monetary policies intended to promote fiscal and economic growth, stability of prices, full employment and a policy for international trade that is sustainable over the short an longer terms.

An open market operation involves the purchase and selling of government bonds or securities by a central bank in order to control as far as possible the interest rate and supply of money available in the country’s economy. The New York Federal Reserve Bank will either purchase such securities to inject cash into the economy, or sell in order to reduce this.

Short-term interest rates can be controlled along with the money supply by open market operations. The decisions made are based upon the preset interest rate, exchange rate and inflation targets. Another responsibility held by the FOMC is to coordinate with the U.S. Treasury in the intervention in foreign exchange markets with respect to the dollar exchange rate.

The Federal Open Market Committee meets eight times each year to set key parameters, such as the discount rate and whether to decease or increase the supply of money into the economy of the USA. This is achieved by either buying or selling government securities. If the FOMC decides that the money supply should be tightened, then the Federal Reserve Board (FED) will sell securities, and so reduce the amount of money available within the banking system.

The FOMC comprises 12 members eligible to vote: the seven members of the Federal Reserve board of governors, the president of the Federal Reserve Bank (FRB) of New York, and four of the other presidents of the FRB, the last of which serve one term on a rotating basis starting 1st January of each year. The Reserve Bank presidents may attend each (approximately) six-weekly meeting, although only the above 12 are able to vote.

The meetings are held in secret and their decisions are the subject of a great deal of speculation as to whether the money supply will be relaxed or tightened, resulting in a reduction or increase in interest rates respectively. The Committee reviews various financial variables and determines a monetary policy commensurate with its long-term objectives of sustainable growth and price stability.

Decisions made by the FOMC can have implications, not only on the economy of the USA, but also on a global scale. For example, if the Federal Open Market Committee makes decisions that ease the availability of credit and makes money cheaper to access, then commodity and asset prices will be pushed and resultant higher commodity prices will have an impact on inflation.

The workings of the Federal Open Market Committee are generally a mystery to the public, yet the decisions made can have a significant impact on their personal and corporate financial situations.

Previous Post Mortgage Wrap Up for the Week Ending September 7, 2012

Next Post Buy Vs Rent Basics: Should You Buy or Rent A Home