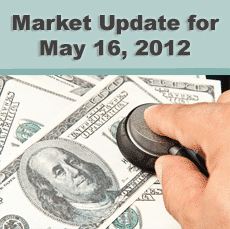 Yesterday saw mortgage rates take a breather from their downward path, despite breaking all time historic lows last week and mounting downward pressure in the form of European debt issues.

The political and economic turmoil in Europe that market watchers have been observing for months has begun to frenzy as Greece looks to possibly stop using the Euro.

Fast forward to today and some very positive data has come out this morning that may exert upward pressure on mortgage rates.

Housing Starts and Permits data for April was released this morning and it came in better than expected. The data showed 717 thousand units when the market had been expecting 680 thousand housing units.  Generally speaking, news that shows health in the US economy is bad for mortgage rates.

A second piece of data also beat expectations this morning. The Industrial Production report came in with a figure of 1.1%, which is more than twice the figure of .5% that the market was expecting and the highest level reported in over a year.

What’s Ahead For Mortgage Rates Today?

This afternoon will see the Federal Reserve Open Market Committee (FOMC) release minutes from their past meeting. Market watchers will be looking closely for any signals or verbiage that might provide insight into future FOMC actions in regard to stimulus.

As we get more economic data being released each week, the health of the data is taken into consideration by the FOMC and can play a role in their decision as to whether they will employ more or less stimulus in the future.

Previous Post Mortgage Outlook for the Week of May 14, 2012