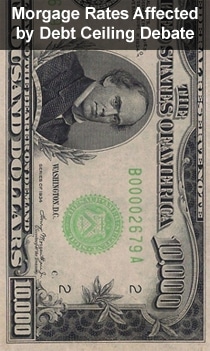 Mortgage rates worsened this morning, led in part by “positive” data from the the National Association of Home Builders/Wells Fargo sentiment index. The index climbed to 15 this month from 13 in June, which was higher than forecast. While the index is still at very low levels, positive surprises such as this one carry more weight in the bond markets than they might normally, given the slew of negative data that has been released in the past weeks.

“It’s still at a very low level,” Michelle Meyer, a senior economist at Bank of America Merrill Lynch in New York, said about the homebuilders’ measure. “In order to see a brighter future for housing, we need to see a stronger economy.”

Builders are facing a backlog of discounted, distressed properties that remain in the foreclosure pipeline and are hesitant to start new projects. Rising unemployment and depressed home values may keep housing one of the weakest parts of the recovery.


Moving forward, mortgage rates will be highly reactive to news relating to Congress’s debt ceiling dialogue and debate. Since the debt ceiling is expected to be reached in early August and the outcome of the debates can have a significant affect on markets worldwide, the next week will be critical in assuring anxious markets or driving them into a deeper state of agitation. Rates can and will react at a moments notice when positive or negative news comes out regarding a debt ceiling agreement or lack thereof. Holding off on locking in the current low levels that rates are at is a gamble as rates may move significantly higher depending on how the debt ceiling talks go. We can help you decide if locking in a low rate is the best move for your existing mortgage or a new purchase you might be contemplating.

Next Post Increasing Your Home's Value With the Right Contractor