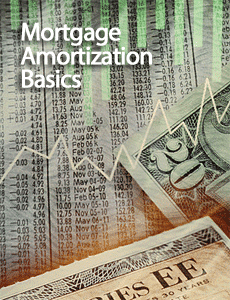 Mortgage amortization is designed to allow you to pay the same monthly mortgage repayments for the entire term of your mortgage loan. The interest on a mortgage is a large part of your monthly repayment. However, it reduces each month – why is that when your payment remains the same? Briefly, the relative amounts you pay towards interest and principal change with each repayment you make: as your interest reduces, you pay more of the principal.

Here is how mortgage amortization works.

Why Mortgage Amortization is Used

The term ‘amortization’ is derived from the old English ‘amortisen’ and ultimately from the Latin ‘admortire,’ both meaning ‘to kill.’ Mortgage amortization is the killing-off, or total repayment, of a mortgage loan and the interest charged.

During the process of amortization, the monthly mortgage interest due is charged at one-twelfth of the annual rate, based upon the principal still owed at the beginning of each month. So, just for argument sake, if your mortgage rate was 6% and you had borrowed $240,000, the interest due at the end of month 1 would 6/12 = 0.5% of $240,000 or $1,200. At the end of month 2 it would be less, because you would also have paid part of the principal.

How Mortgage Repayments are Calculated

This is not what most people want. They want to pay the same amount every month, so they can afford the initial payments, which then become a progressively small we proportion of their income as they earn more. That is how mortgage amortization works – to enable that to be achieved.

The total interest payable over 30 years with the capital reducing each month by the amount above is calculated. In this example, interest will be calculated on $240,000 for month 1, $239.333.33 in month 2, 238,666.67 in month 3, all the way to the full 360 months. The interest payable for each of these reducing figures is added and dived by 360 to give an average monthly figure. This is added to the principal repayment to provide an average monthly sum.

With an amortized mortgage the interest on a mortgage is calculated for the full 30 years, and split into equal monthly payments. Initially, a larger proportion of your mortgage payment will be for interest, and after a point, the larger proportion will be used for repayment of the principal.

In the example above, your mortgage payments would be around $1,439 monthly. This is at the example of 6% interest. The first repayment would include only 772.33 interest, not $12,000, making the mortgage more affordable. Towards the end of the 30 years, much more than $1,200 would be paid in interest with less to the capital.

At a lower interest rate of 3.5% the mortgage repayments would drop to $1,078. This makes the mortgage more affordable during the initial years. You will also be paying the same amount for the full 30 years. A combination of inflation and higher income makes the repayment increasingly more affordable with mortgage amortization. For more information, please contact Anthony DiLeo at (732) 264-2700 x 18, or email at [email protected]

Next Post Financing Closing Costs: Is it Worth it?