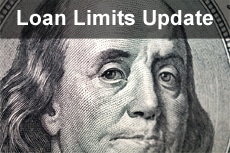 As part of the economic stimulus package in 2008, temporary loan limits were enacted to help homeowners in high-cost areas that were unable to get loans for more than $417,000 under the standard conforming loan limits regardless of their payment history, credit and income. Homeowners in areas such San Francisco, New York and Los Angeles routinely faced higher priced homes, which meant they were required to bring in substantially larger down payments when purchasing their home.

Representatives John Campbell, a California Republican, and Gary Ackerman, a New York Democrat, introduced a bi-partisan bill, H.R. 2508, the Conforming Loan Limits Extension Act, that would extend the 2008 loan levels for Fannie Mae, Freddie Mac and the Federal Housing Administration for an additional two years. Without this bill, the higher loan limits are scheduled to expire on September 30,2011.

These temporary conforming loan limits are set to expire on September 30, 2011 if the bill extension is not passed. Upon expiration, these high-cost areas will be subject to standard conforming borrowing loan limits as shown below.

If you live in a high-cost area, remember that regardless of where rates are, you may have trouble getting the loan size you need. Be sure to speak with us regarding your options as far in advance of the expiration as possible as H.R. 2508 has only been proposed, it has not passed and may not pass. We can help you understand the options you have so that you can make an informed decision before these higher loan amounts are no longer available.

Previous Post Applying for a Mortgage: How Much Can You Afford?