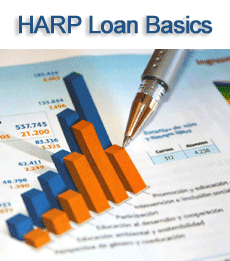 The Home Affordable Refinance Program (HARP) was introduced to enable people with negative equity, but who are up to date with their mortgage repayments, to refinance without the need to take private mortgage insurance (PMI).

HARP is fundamentally about private mortgage insurance in relation to the difference between the mortgage still owing and the current value of the property.  It all began during and just after the sub-prime mortgage collapse in 2006 that led to a serious housing bubble burst. The prices of homes dropped rapidly, and many people fell into a negative equity situation.

When those that found themselves in this situation tried to refinance their homes, they found that the lenders insisted on them buying private mortgage insurance, which in many cases resulted in this type of refinance being uneconomical.  A loan to value ratio (LTV) of 105%-120% was not unusual as a minimum rate, meaning that if the amount still owing was 5%-20% more than the value of the house then PMI must be purchased.

For such people to be able to refinance their home with this degree of negative equity, they were forced to pay for PMI. This payment, when added to their refinance payment, would frequently make it impossible for such people to afford  to refinance their homes. Many considered this unfair, particularly in view of the fact that the collapse in property prices had  nothing to do with them. They had done nothing wrong, and had been faithfully maintaining their mortgage repayments.

As the recession deepened, it became apparent that millions of people were finding themselves in this situation. Yet, still the banks were insisting on an LTV ratio of 80%. So if your home was valued at the above $200,000, your existing mortgage should be no more than $160,000. Above that you had to buy PMI.

The government acknowledged this problem in 2009 with the Home Affordable Refinance Program, henceforth referred to as the HARP. The normal LTV ratio of 105% was reduced to 80%, so that if you owned a home valued at $200,000 you could refinance without PMI if the amount you owned was $160,000 – not a minimum of $210,000 as previously.

Is the Home Affordable Refinance Program open to everybody? Naturally HARP has some qualification conditions, and the criteria that you must meet in order to benefit from it include:

Another qualification is that you, as the homeowner, should either be offered lower monthly repayments or offered a better repayment arrangement – for example, taking a fixed rate rather than a variable rate mortgage agreement. You must accept one of these, not just be offered it!

If you already have private PMI, you might have problems refinancing your home under the 2012 version of HARP.  If you have paid under 20% of the price of your home as a deposit, you will already likely have PMI. This is due to the way that Wall Street hedges loans and you will likely find just a few lenders that will offer you refinance.

Although most of the PMI insurance companies have gone with this arrangement, many lenders have failed to do so. A lot depends on the private mortgage insurance policy you have and who it is with, but if your current lenders fails to accept your PMI then you have the right to approach other lenders to take over your loan under the new current HARP regulations. You will possibly find many that are prepared to offer you a better deal than you have right now and offer you a brand new HARP 2.0 loan that will meet your needs.

In short, if you owe more than 80% of your home’s current value, you are entitled to apply for refinance under the Home Affordable Refinance Program without having to pay for private mortgage insurance.

Previous Post Mortgage Outlook for the Week of July 30, 2012

June 14, 2013 Financing Building a House: How to Finance Building a Home Read More
January 13, 2016 Planning Your Relocation Across The Nation Read More
June 16, 2016 Back To Credit Score Basics – What You Can Do To Qualify Read More