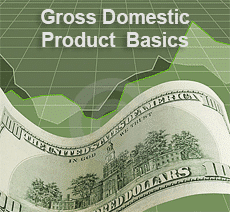 The following GDP basics explain what the term GDP means and how it is calculated.  The GDP is the Gross Domestic Product of a country, and is a metric that is used to measure the health of the economy of that particular country. It is fundamentally a measurement of consumer and government spending, the difference in value of exports over imports, and industry investments taken over a specific time period – usually one year.

The Per Capita GDP is the same figure calculated to take a country’s population into account, rather than comparing the nominal figure. This permits the figure for two counties to be compared accurately, irrespective of population. Another form is the ‘real’ GDP, which takes price increases and inflation into account when comparing different years.

Gross Domestic Product is normally expressed relative to previous periods, so rather than being expressed in firm cash figures, it would be stated, for example, as being up 2% on last year. What this means is that the country’s economy has grown by 2% over the previous year. What factors influence the Gross Domestic Product of a country? Here is a quick explanation of GDP basics regrading the factors involved , taking the USA as an example:

Every cent spent by American consumers forms one component of the GDP. So if you purchase a new car, a washing machine and tour Arizona, all the money you spend goes towards the calculation. What you earn is irrelevant – it is what you spend that matters. Spending on services such as life insurance and hair styling is also included.

If the firm you work for buys a new fleet of cars, new manufacturing plant or even raw materials to be used in manufacturing, then that is also added to the figure. Industry investment can be high, which is why the health of a country’s manufacturing industries is so important to its GDP. The same is also true of service industries, such as insurance, banking and vacation companies.

The difference between the value of total imports and total exports to and from the USA also contributes. If a company purchases $1 million of raw materials from China and exports $2 million of product to Germany, then $1 million is added to the GDP of the USA and China, and $2 million deducted from that of Germany.

The government gets its money from your taxes. Every cent spent by the government for whatever reason is added to the GDP. It makes no difference if such expenditure is for pencils or space shuttles – it is government expenditure.

The above expenditure method of calculating the gross Domestic Product of a country is the one most commonly used. It can also be figured by taking the gross income of every employee in the country, all taxes paid and the gross profits of all companies. The two will roughly approximate each other, although the expenditure method is easier to use and less liable to error.

Factors that have no bearing on the  GDP include taxes (it is government spending using those taxes that count), gross and net income and interest payments made to you.

What is the GDP Used For?

This measurement is used by American and world banks to determine the health of a particular country’s economy, and is a key indicator for setting interest rates. Thus, if the GDP is rising too fast year on year, then interest rates might be increased to control industrial investment. Too rapid an increase in the economy can result in inflation and rising prices.

Since the Gross Domestic Product  is an absolute rather than relative figure, larger countries will have a higher figure than smaller countries. Therefore, as explained earlier, it can only be used to compare results with other periods.

If the Gross Domestic Product of a country has dropped over that of the previous year, then banking interest rates might be held, or perhaps even reduced to give a boost to the economy by making it cheaper for firms to invest in equipment and infrastructure. A steady reduction can herald an oncoming recession and will also affect the stock markets.

Negative growth results in a lowering of share prices, so it is little wonder that the real or per capita GDP is a measurement that all financial analysts keep a close eye on. Up or down, trends can cause changes in the stock exchange, in interest rates and even in the money supply and house prices. Although the above GDP basics offer an insight into what the Gross Domestic Product is, no basic introduction could convey its importance to governments and financiers.